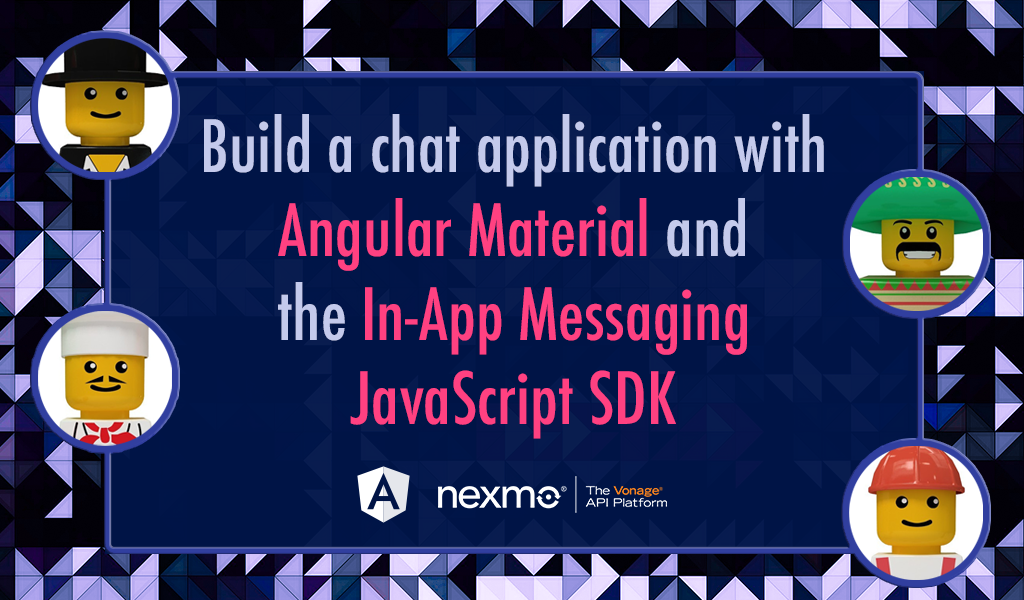 Build a Chat Application with Angular Material and Vonage

In this tutorial, we’ll enable chat in an Angular web application using the JavaScript SDK and the In-App API so that users can communicate in our application. If you’d like to check out the source code, it lives on our community GitHub page.

This is what we’re trying to build:

Getting the middleware code from Github

First, we’re going to clone the middleware source code and install the dependencies for it. We’re going to write a Node.js application using Express that provides a level of abstraction between the Vonage API and the Angular code:

Running the middleware code from Github

Before we can run the code, we’ll need to create an RTC application within the Vonage platform to use within this code:

The output of the above command will be something like this:

The first item is the Application ID, which you should take note of (we’ll refer to this as APP_ID later). The last value is a private key location. The private key is used to generate JWTs that are used to authenticate your interactions with Vonage.

Now we’ll need to make a copy of example.env and call that .env, and update the values within your Vonage API_KEY and API_SECRET. We’ll also have to add the APP_ID we just generated and the path to your private key. After we’ve updated the values, we can run the code in debug mode with:

The app should be running on localhost:3000. Now that the app is running, we’re going to go ahead and create a couple of users and a conversation, and then we’ll add the users we created to the conversation.

We’ll create a couple of users by running this command twice, once with the username alice and then with jamie:

We’ll make a note of the user ID and refer to it later on as USER_ID. Now let’s create a conversation via the demo API:

Now that we have our middleware up and running, it’s time we created the Angular application. We are going to use the Angular CLI to generate the app, so if you don’t have it installed, you’ll need to install that first:

After the previous command finished, we’ll add Angular Material and its dependencies to the project:

We’ll also have to import the NgModule for each component we want to use in our application. In order to do that, we need to open src/app/app.module.ts in our editor and import the modules at the top:

We’ll also need to update the @NgModules imports declaration to add the modules from above:

We’ll also want to add a theme to Material, so add this line to your style.css:

If we want to use the official Material Design Icons, we’ll need to load the icon font in our index.html:

Now that we’ve got our Angular application generated and all set up with Material, we’ll install the Vonage Client SDK for JavaScript and add it to the bottom of polyfills.ts:

We’ll need to create an Angular Service to handle the data from our middleware. Let’s generate it using the Angular CLI:

We need to update app.module.ts in order to import the MessagingService and register it as a provider:

Let’s start building some UI for our app. We’ll start with a LoginComponent, and we’ll generate that with the Angular CLI:

That will generate a login folder inside the app folder, and four files, for the HTML, CSS, and TypeScript code, as well as tests. Let’s replace the code in login.component.html with a UI for logging in. I chose a <mat-grid-list> with a <mat-card> inside of it, and a form with a login button that calls onLogin() when it’s submitted. The code looks like this:

Let’s add some CSS to it for the Material spinner, in the login.component.css file:

We also need to update login.component.ts in order to add the MessagingService to it and implement the onLogin() method. The method is going to take the username, make a request via the messaging service to the middleware we are running in order to get a user JWT, and then use that to authenticate via the login method of the Vonage In-App JavaScript SDK. The code looks like this:

Notice that I’ve imported the Router from Angular, injected it into our constructor and I’m using it at the end of the authentication flow to navigate to the next page, /conversation.

We haven’t actually created the conversation component yet, so let’s go ahead and use the Angular CLI to create that:

We’re going to update the conversation.component.html file to use a material sidenav component, which lists the user conversations on the left and the conversation members on the right, leaving the middle for our main chat. We’ll add a header to the chat section to list the conversation name and member count, and add an input section at the bottom. We’ll leave the middle section for the actual conversation history to be displayed. We’ll build an empty shell for now and add to it later as we develop the ConversationComponent. The HMTL should look like this:

Let’s start by implementing ngOnInit() so that it checks if we have app data before trying to getConversations using the In-App SDK. If there is no app data, then we’ll get redirected to the login screen:

We need to implement a helper method for building a conversations array out of the conversations dictionary the In-App JavaScript SDK provides, so we can use it with *ngFor in the UI later on:

Let’s add a method for selecting a conversation from the list. We’ll need to take the ID from the view and pass it on to the controller, and then use the Vonage SDK to get data about the conversation. We’ll store this in a class property, so it’s available to the view later on. We’re also using Observable to create an array from the conversation.events Map, so we can recreate chat history when the user comes back to the app. We’ll also add an event listener using the SDK to listen for text events and add those to the events history as well:

Last but not least, let’s add a method that takes the input from the view and sends it to the Vonage In-App API via the SDK:

Now that we’ve implemented all the methods we need, we can go back and start to flesh out the view some more, to use the data models we created in the controller. First, let’s update the conversations section in conversation.component.html:

We’re using a pipe called keys here to transform the members dictionary object we get from the SDK into an array, so we’ll need to create that using the Angular CLI and update the generated keys.pipe.ts file:

Next, we’ll update the conversation-header section of the view to display the selected conversation name and member count:

We also need to update the conversation-history section in order to parse the events and recreate history in the chat. Events coming from the In-App SDK have multiple types, so we’ll account for some of them, like member:joined and text:

Let’s add some CSS to it to make it full screen and fixed position. Add the following CSS to conversation.component.css:

Last but not least, we need to update the app routing module in app-routing.module.ts in order to have the correct routes displayed:

We also need to replace the entire app.component.html with the <router-outlet> in order to display the router on the first page:

After making the app detailed in this post, run the app to see it working:

The app will run at “http://localhost:4200”. I’d suggest opening the app in two separate tabs, logging in with both alice and jamie and start talking to each other! If you’d like to see the app in its final state, you can check out the source code for this app on our community GitHub page. If you want to see a more advanced version of this code, you can check the stitch-demo middleware code you downloaded at the beginning of the blog post. It also contains an Angular Material front-end.

If you’d like to continue learning how to use the Vonage Client SDK for JavaScript, check out our quickstarts where we show you how to:

If you have more questions about using In-App SDK, we encourage you to join the Vonage Developer Community Slack and check out our #nexmo-client-sdk channel or email us directly at ea-support@nexmo.com. 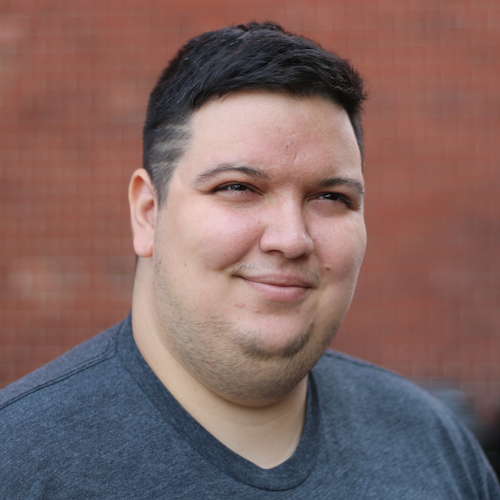