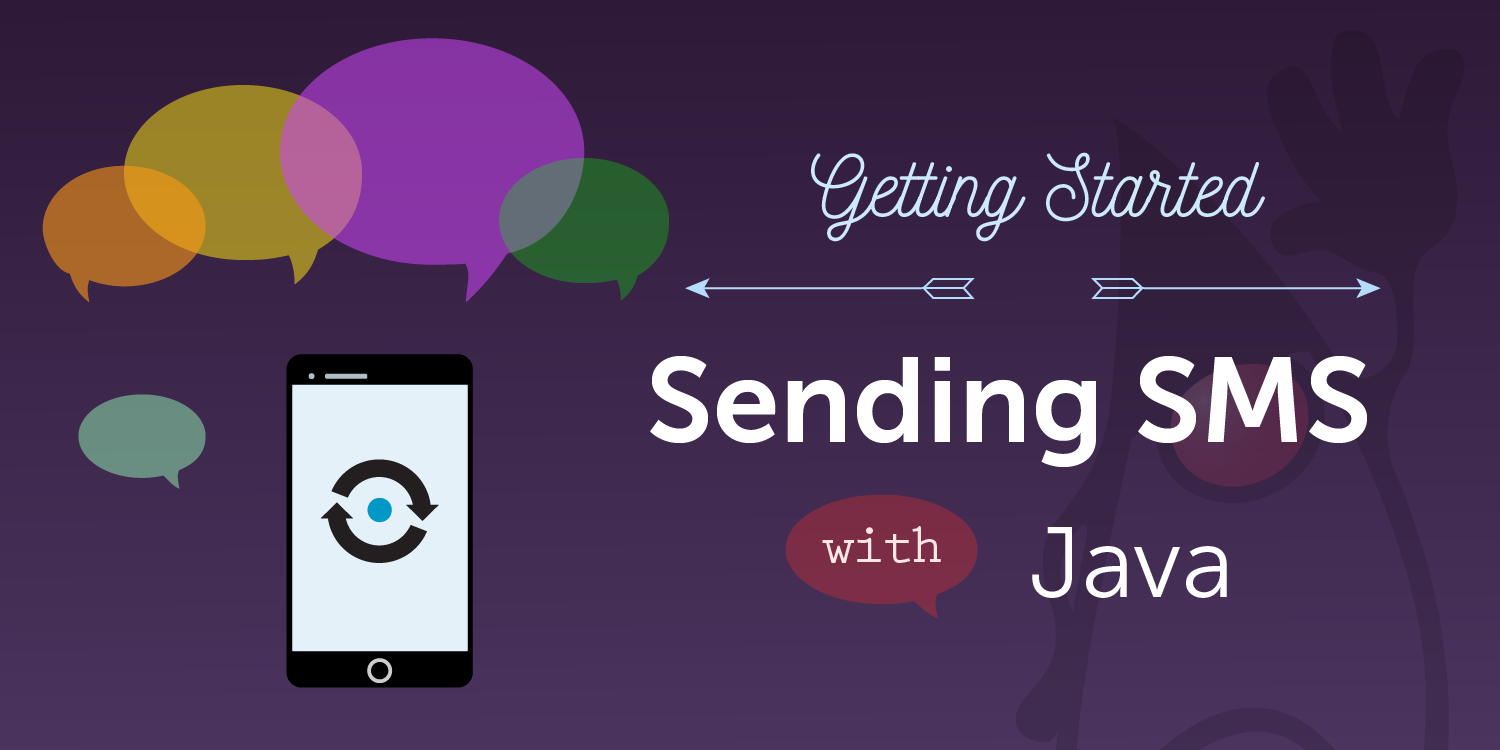 How to Send SMS Messages with Java

This is the first in a series of “Getting Started with Nexmo and Java” tutorials.

The Vonage SMS API is a service that allows you to send and receive SMS messages anywhere in the world. Vonage provides REST APIs, but it’s much easier to use the Java client library we’ve written for you.

In this tutorial we’ll cover how to send SMS messages with Java!

Now we’re going to set up your Gradle project and download the Nexmo Client Library for Java.

First, create a directory to contain your project. Inside this directory, run gradle init. If you haven’t used Gradle before, don’t worry – we’re not going to do anything too complicated! Open the file build.gradle and change the contents to the following:

Now, if you open your console in the directory that contains this build.gradle file, you can run:

This command will download the Nexmo client library and store it for later. If you had any source code, it would also compile that – but you haven’t written any yet – so let’s fix that!

On macOS and Linux, you can create this path by running:

Inside the getstarted directory, create a file called SendSMS.java, open it in your favourite text editor, and we’ll start with some boiler-plate code:

All this does is import the necessary parts of the Nexmo client library, and create a method to contain our code. It’s worth running gradle run now, which should run your main method. It won’t do anything yet, but this is where we get to the interesting bit.

Put the following in your main method:

Fill in API_KEY and API_SECRET with the values you copied from the Vonage API Dashboard. This code creates a NexmoClient object that can be used to send SMS messages. You will need to provide other AuthMethods to be able to make voice calls, but I’ll cover that in another blog post. Now we have a configured client object, we can send an SMS message:

Again, you’ll want to replace FROM_NUMBER and TO_NUMBER with strings containing the virtual number you bought, and your own mobile phone number. Once you’ve done that, save and run gradle run again. You should see something like this printed to the screen:

… and you should receive a text message! If it didn’t work, check out if something was printed after ERR: in the line above, and maybe wait a few more seconds for the message to appear.

So you just learned how to send an SMS message with Vonage! You can either stop there, or for bonus points, we can build a Web service around it, which will be useful in the next post where we’ll be writing a webhook to receieve SMS messages sent to your virtual number.

We’re going to build a tiny HTTP service and then test it with Postman. Fortunately Gradle makes this quite easy. Open your build.gradle and add the following to the top:

The first line tells Gradle it should build a war file, using source files in src/main/java and src/main/webapp. The second line adds the ability to fire up your webapp straight from Gradle using the Jetty servlet container!

I’m going to suggest you run gradle appRun now (note that you use appRun and not run to run the web server!) It’ll take a while the first time, while it downloads some dependencies.

This means Jetty is now running your (empty) web service. Fire up the URL you see, to check it’s running OK. It should look a bit like this: 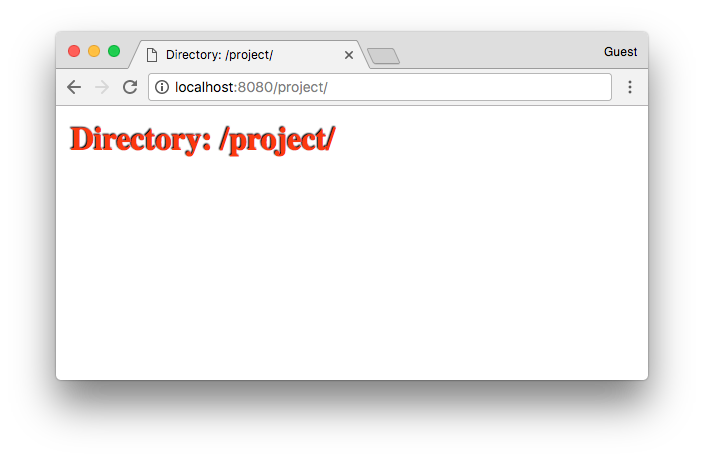 And then we need to configure the servlet in our servlet container by creating the following at src/main/webapp/WEB-INF/web.xml:

Replace the placeholders with your own values, and then run gradle appRun. If everything builds correctly, let’s fire up Postman and make a POST request, like this: 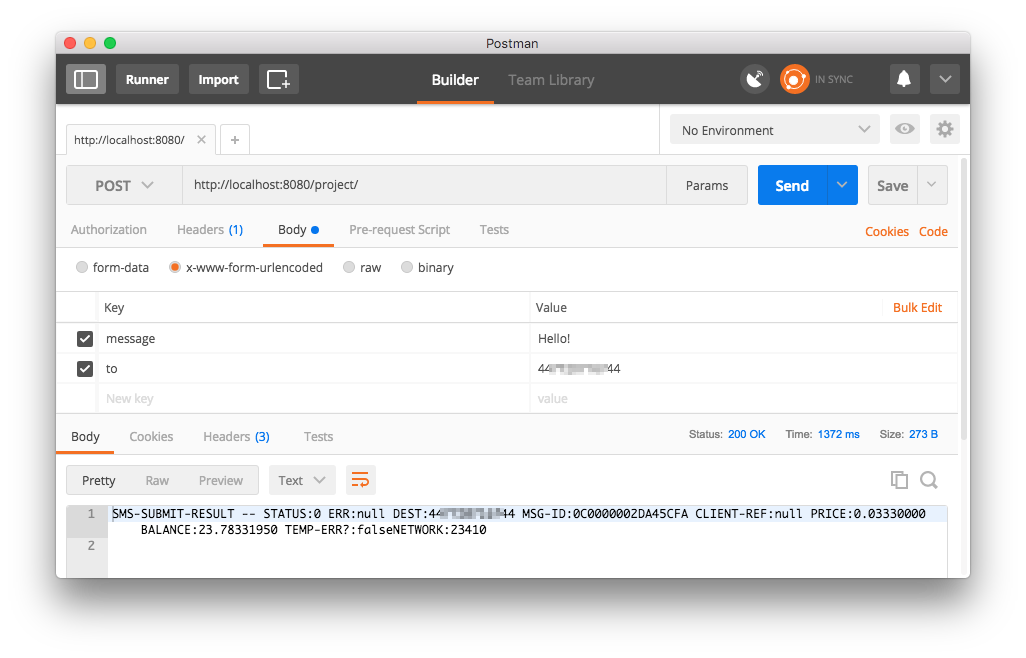 I hope it worked! So now you’ve built a REST Web service for sending SMS messages! In reality, there’s lots more things you’d want to do before deploying this, like adding authentication (otherwise anyone could send a message using your Vonage API account!), a nice Web form for posting to the service, and improving the error handling – but this is a good start!

So far we’ve learned how to send SMS messages with Java. In the next post, we’ll extend this service to receive SMS messages sent to your virtual number.