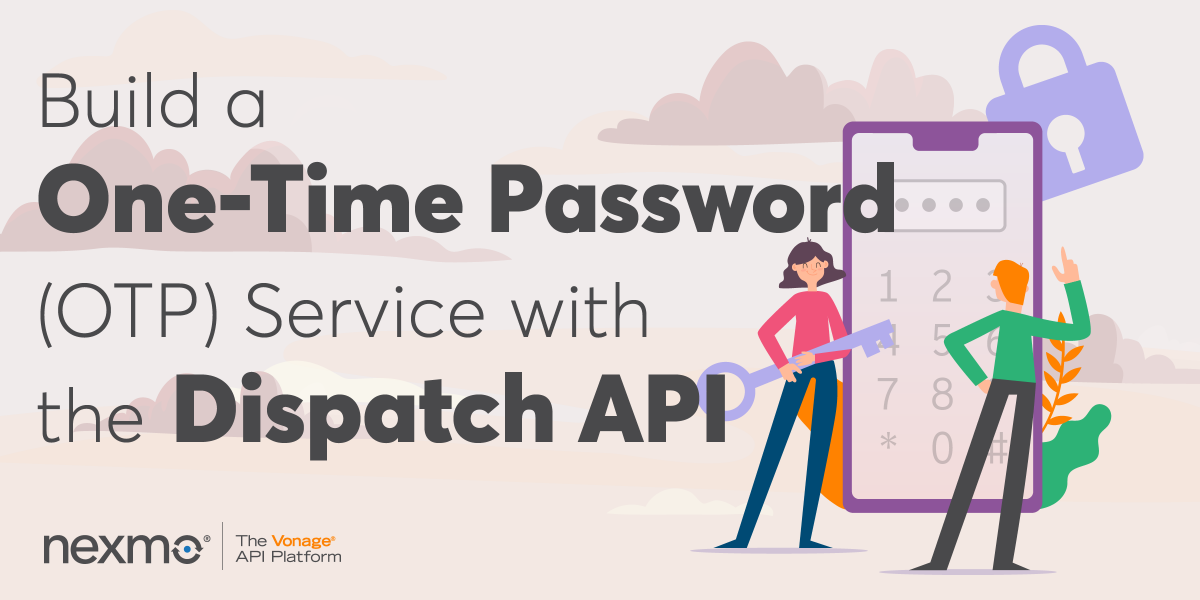 One-time passwords (OTPs) have become quite familiar in recent times, mainly due to a security requirement that traditional passwords do not guarantee. While the protection of the traditional password is the responsibility of the user, who as we well know often does not care enough, the OTP is practically self-protected because it is generated randomly, and its validity is limited in time.

In this article we will see how to implement a basic OTP service based on two Web APIs:

The OTP service has no user interface. It is conceived as a microservice you can invoke from your application to generate and verify OTPs.

In order to use the OTP service shown in this article, you need:

As we will see later, the application uses express as its web framework and the Nexmo client library for Node.js, in order to send the OTP to the user.

Before using the OTP service, you need to perform some configurations on the Vonage API dashboard in order to enable the message delivery through the Vonage Dispatch API. This API allows you to send messages to your users by using multiple channels with prioritization. For example, in our case we will send the OTP to the user via his Messenger account, as a first attempt. If the user doesn’t read it within a given amount of time, the message will be sent via SMS to his phone number.

So, access your Vonage API dashboard and select the Messages and Dispatch item in the menu and then select Create an application, as shown by the following picture: 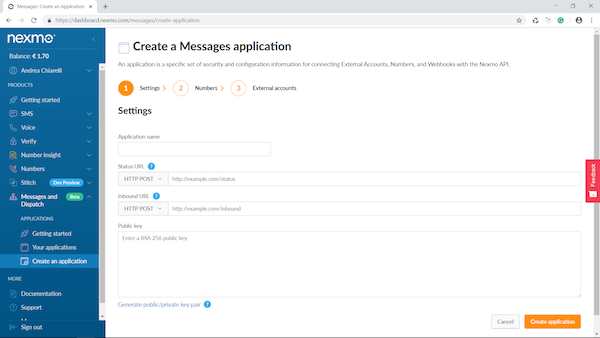 In Vonage API lingo, an application is a bunch of data enabling you to use the Messages and Dispatch API. As we can see from the form above, the minimal data are:

The steps two and three of the message application creation allow you to assign phone numbers and/or links to external accounts for services like Messenger, WhatsApp, or Viber, so that you can send SMS or messages through the Message and Dispatch API. In particular, see this document to understand how to link your Facebook Page to your Vonage API account.

Be aware that the status and inbound URLs to be provided to a Vonage API application must be publicly accessible. If you haven’t a public web server or you want just to try on your computer, use ngrok, a tool that allows you to publicly expose your local web server. Read this post for more details on using ngrok. Keep in mind that, if you use the free plan of ngrok, a temporary URL will be generated each time you run the tool. So, you need to update the application data accordingly.

After creating your Vonage API application, an Application Id will be assigned to it. Take note of it.

Once you have configured the Vonage side, you have to configure the OTP service side in order to make them communicate with each other. So, open the nexmo.json file under the src folder of the project and provide the requested data:

You can retrieve the apiKey and the apiSecret values from the settings section of the Vonage API dashboard, while the applicationId is the value of which you took note in the previous section.

Then, take the private key associated with the public key you assigned to the application and store it into the private.key file under the src folder.

It’s time to run your OTP service. Type the following command in the root folder of the project:

After a few moments, you should get a message saying that the server is running on port 3000. You can verify if it’s working by pointing a browser to the http://localhost:3000 address. If everything is OK, you should see the message “This is the OTP service”.

Now, imagine that your application needs to generate an OTP to be sent to a user in order to verify his identity. It needs to submit a POST request to the OTP service by providing a string acting as the identifier of your request and the contacts of the user the OTP is to be sent to. You can do it by submitting an HTTP request like the following to the running OTP service:

The string 123456789 attached to the API URI is the identifier of your request. We name it token, and it is up to you to provide it. The body of the request contains a JSON object with the Messenger identifier and the phone number of the user who will receive the OTP.

You can submit the request via Postman as shown by the following picture: 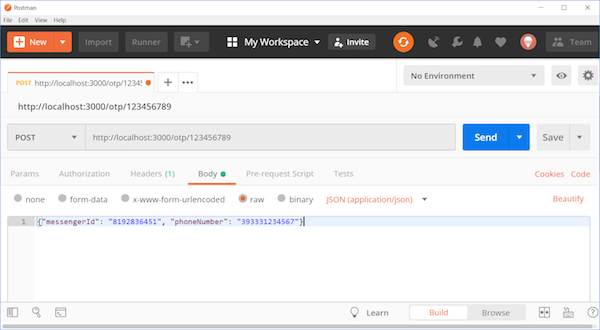 The OTP service will generate an OTP composed of 5 digits and will send it to the specified Messenger identifier. As we will see later, if the user doesn’t read it within a given amount of time, the OTP will be sent via SMS to the phone number. Anyway, after a successful OTP creation you should receive a 201 Created HTTP status code.

Regardless of the medium by which the message was received, the user should verify the OTP by submitting a GET request to the second API, as in the following example:

The URI of the API is composed by the otp prefix, by the request token, that is the request identifier provided when you requested to create an OTP, and the OTP itself.
In Postman, it appears as follows:

By sending such a request, you may have one of the following HTTP status code as responses:

You may also receive the 404 The code is invalid for unknown reason HTTP status code when the OTP service is not able to verify your code for any other reason.

Let’s now take a look at the code that implements our OTP service. The following picture summarizes the folders and the files belonging to the project: 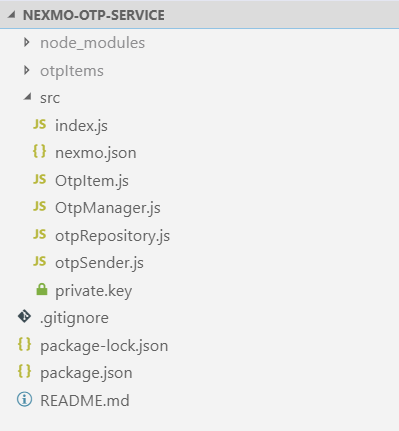 The index.js file under the src folder contains the starting code of the application and the definition of the Web APIs. The creation and verification APIs are implemented by the following code:

As you can see, both APIs rely on the otpManager to actually create and verify the OTP, and on the otpSender to send it to the user. Their initialization occurs a few lines above, in the same index.js file:

Here you can see that the whole service is composed of three components:

The existence of these three components allows you to keep the implementation of creation and verification, storage and delivery independent each other.
When you create the instance of the otpManager, you pass the otpRepository and an options object saying how long the OTP should be (five characters) and how long it is to be considered valid (five minutes).

The create() method generates a new OTP and is implemented as follows:

It takes a token as input and generates a random number of five digits. It ensures that the resulting code is composed of exactly five digits, even if the first digit is a zero, by converting it into a string and padding it with “0” characters. Of course, this is a very simple implementation of the OTP creation. You might want to implement more accurate algorithms, but this is out of the scope of this article. Once generated the code, it creates an otp object as the instance of the OtpItem class and adds the new otp instance to the otpRepository.

The OtpItem class defines the structure to represent the relevant information for the OTP, and is implemented in the OtpItem.js file:

The verify() method checks if the passed code for a given token has been generated and if it is still valid. Here is its implementation:

The method builds an OTP identifier by concatenating the token and the code. This identifier is used to get the otp instance from the otpRepository. If such an instance exists, the method verifies if it has been already verified and if it is not expired. The value returned is an enumerated value representing the OTP validity status.

The otpRepository stores the instance of an OtpItem into the file system as a plain JSON file in the otpItems folder. This is a very simple solution that works for a demo case. You might want to implement it by storing data into a database.

Here is the implementation code you can find in the otpRepository.js file:

The otpSender component sends the OTP to the user by using the Vonage Dispatch API. It is implemented by the otpSender.js file as follows:

It composes a configuration by merging data from the nexmo.json file and the private.key file. This configuration is passed to the library constructor in order to get a nexmo instance. This instance will be used in the implementation of the send() function. The function takes an OtpItem instance and a recipientAddresses object as arguments and builds the message to send to the user and the payload for the Dispatch API

Through the nexmo.dispatch.create() method, you are creating a delivery workflow with failover. The second argument of the method is an array containing three items:

This increases the chances that the generated OTP will be delivered to the user regardless of the communication medium used.

Andrea Chiarelli has over 20 years of experience as a software engineer and technical writer. Throughout his career, he has used various technologies for the projects he was involved in. Currently, he is a software architect at the Italian office of Apparound and contributes to a few online magazines and blogs.

See All Posts by Andrea Chiarelli 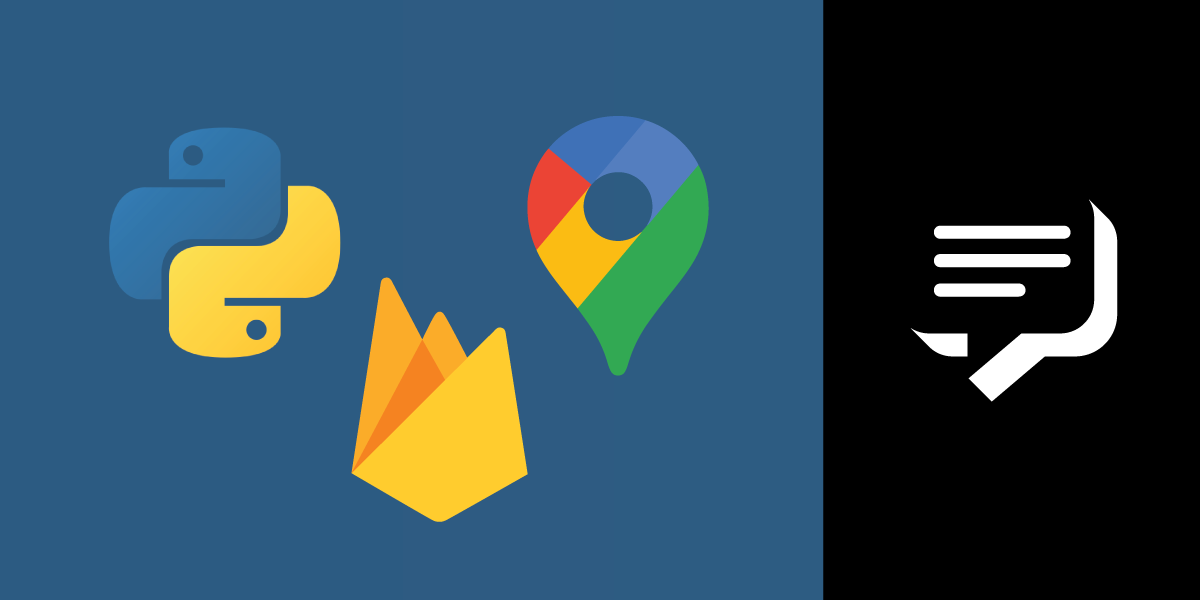 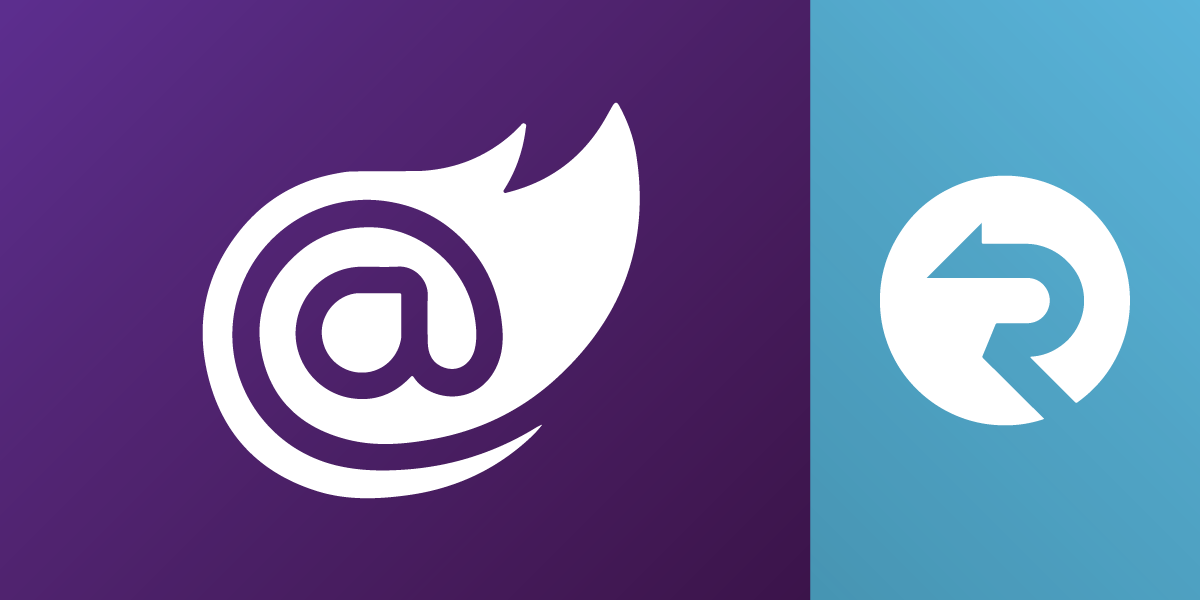